The Prayer For My Mother That Made Me A Better Man

I am not a Jew who prays three times a day, in the morning, afternoon and evening as proscribed by Jewish law. Not like my wife’s four religious cousins who live with their large families in Israel. Not even like my Modern Orthodox brother in Jerusalem, who often dons a baseball cap and finds time to pray three times daily, even if he doesn’t always get to shul

But the day after my mother died, when the rabbi stopped by my parents’ house the day before the funeral, I felt a shift bubbling within me.

Around the kitchen table, where I sat with my father and two brothers, the rabbi outlined a mourner’s obligation of saying kaddish, and therefore finding a minyan. Daily. Ideally, morning, afternoon and evening, for shacharit, mincha and ma’ariv. For eleven months for the sake of a parent’s soul.

I can’t say what was stirring inside me that first week of sitting shiva. Every late afternoon, the house in which I’d grown up in California’s East Bay filled with my mom’s and dad’s friends, my cousins and members of their Oakland shul. We davened the afternoon and evening prayers, we mourners saying kaddish. Early every morning that week, one of my brothers and I made it to the synagogue’s 6:45 a.m. service.

When I returned to my home in Hartford, Conn., I picked up where I’d left off, attending morning and evening services at my Conservative synagogue. At least, I’ll continue saying kaddish through the next prescribed stage of mourning, I thought about the 30-day period, otherwise known by the Hebrew, sh’loshim.

Why did I continue going to shul twice daily? Was it that I wanted to impress the small club of men and women I sat with at my synagogue – the hard-core Conservative Jews, those who might see me as a lightweight if I wimped out? (A part of me was that insecure — think I can’t come to a minyan every morning and evening? Just watch me.)

Another part of me, the more spiritual side, the part that forever wants to challenge myself to reach higher even when doubt nags at my inner core, wanted to see myself at the amud, the prayer stand, leading any part of weekday services, a custom among mourners. My prayer Hebrew lacked the proficiency to do so and I couldn’t hold the specific melodies required to chant the prayers. That would take practice.

I kept going. One month, two months, and on and on.

When I traveled, I sought out nearby shuls. In New York City – easy. Outside Youngstown, Ohio, more difficult, but I made it. 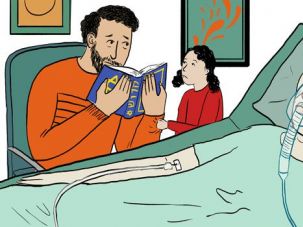 My Wife Doesn't Get How Important Kaddish Is to Me

January 11, 2015Once in Key West, I was told I could find a minyan at “Jungle Paradise,” a souvenir shop on Duval Street. When I arrived, all I saw were tourists shopping for t-shirts with funny or stupid sayings, bikinis, sandals or shot-glasses. I was about to leave when a few Israeli men walked in, then a few more.

“We’ll pray in the back,” one of them said, as 10 of us squeezed into a storage room packed with boxes of inventory. Tangerine-colored skirts hung on a rack and muffled sounds of FM pop radio played over the afternoon prayers.

I wondered how saying kaddish was changing me. Besides taking up two hours of every day, and more on Shabbat, the deeper effect was subtler. I had done a good job sabotaging my career as a writer over the years, procrastinating on big projects out of fear I might fail. I started asking myself what would happen if I took two hours everyday to work on something else I’m committed to like a work goal or something else I dreamed of within my life.

Meanwhile, back home, when the gabbai, the one in charge of prayers, asked me to lead small parts of the service, I accepted. I saw it as God saying, “You want change in your life? Take this one step.” As I did, I felt my self-esteem grow. I saw it as honoring my mother’s memory. And, though I never told anyone, I saw my mother sitting in one of the seats, a big smile on her face, kvelling with pride. In my spare time, I listened to recordings on my laptop of other parts of the services, a siddur in hand, as if rehearsing lines for a play.

Six months after my mother’s death, I returned to California to visit my father. I rode shotgun with him as he drove around town, looking like a man who had come to terms with the loss of his wife of more than 50 years. A Holocaust survivor who spoke with a thick accent, he went to a doctor’s appointment with a thick loaf of Artisan bread, which he gave to the nurses.

“They say it’s the fountain of life,” he said, laughing. Everyday while visiting, I returned to my father’s shul to say kaddish, sometimes with him, mostly by myself. One morning five men sat schmoozing, waiting for the service to begin. The gabbai nodded when I walked in.

“You want to start us off?” he asked, knowing I was a mourner.

By then, I’d grown comfortable leading services at my Conservative synagogue, but this was an Orthodox shul, where no prayer was skipped, where the minyan sounded like a tribe of natives to prayer and the Hebrew language. I felt both dread and a longing to say yes.

“Maybe tomorrow,” I answered, hating my cowardliness, wishing I had the courage to accept the honor. Then I thought, maybe I could do it. After all, I had been attending services more frequently at an Orthodox shul in my neighborhood, at first because the times worked better with my schedule, then because I admired their rhythm. Like a sandlot baseball team, where everyone played the game well.

“Why don’t you just do the beginning?” he offered.

I felt a chorus of fans, urging me on: “Do it! Do it!” And I sensed that this was how real change begins. My mother, set in her own ways, never urged me to take risks. But I knew stepping out of my comfort zone was the only way to grow, and it would be my way of honoring her. I walked up to the podium, facing the ark, my back to the congregants, my heart beating nervously, as I chanted the morning blessings of gratitude, waiting for the next guy to take over.

“You’re doing great,” the gabbai said. “Why don’t you continue?” I did, then kept going till nearly the very end. “Take your victory lap,” he said, and I walked away, shaking hands with men nearby.

On the day of my last kaddish, I made sure we had a minyan, calling or emailing friends, some of whom rarely, if ever, attended services. I was taking charge of a reality I envisioned, asking for what I wanted, something I hoped to carry out in other parts of my life.

Chanting the prayers, I felt like a leader in the community, and after that year I took what for me were more courageous steps. One was leaving my Conservative synagogue, a move that felt scary because I had been a dedicated member. I quit to join the Orthodox one, where I started initiating new creative programs. Four years later, I was elected president — a dramatic change for a guy who once felt nervous in the spotlight. 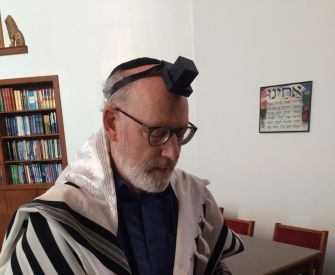 Last spring, almost eight years after my mother died, my dad passed away, and I’m saying kaddish again through the year.

“What do you get out of it?” one of my millennial kids asked.

“I like standing up and leading,” I said. But that wasn’t my final answer, as I chewed on his question overnight.

Jeff Klein, author of “Working for Good,” says discipline “places your head in service of the heart.” That resonated for me. But there was more.

Jewish tradition offers a gateway into a practice for dealing with loss. You can embrace the ancient wisdom or not, a choice, even if the tradition sees it as an obligation. Walking through that gate with all its uncertainties, like life itself, was mine.

Leonard Felson is a writer and essayist who covers change in the Jewish world and the public sphere. He is a former reporter for The Hartford Courant. His work has appeared in The New York Times, The Boston Globe, Reader’s Digest, Tablet Magazine and the Jerusalem Report.